And we get to wear our shades in the dark

I’m pretty excited about the fact that Columbia, S.C. is the prime viewing spot on the

I’m not a science geek or particularly interested in astronomy (actually, I’m lost when it comes to astronomy), so I’m not sure why I’m revved about two minutes and 36 seconds of daytime darkness. But I am, and so is the rest of the city.

All sorts of eclipse-related events and festivals are planned for the week leading up to the big day. You can keep an eye on those here and here. For more scientific info on the eclipse, you can visit The Great American Eclipse.

If you’re in the area before or after the event, a new laser art display was installed and will be lighting up a portion of the Congaree River for the next decade. And that’s a pretty cool thing in our famously hot city.

We don’t get too many days of comfortable temperatures and low humidity here in South Carolina. We’re having a lovely spring that includes lots of rain to nourish the posies and wash away the pollen. 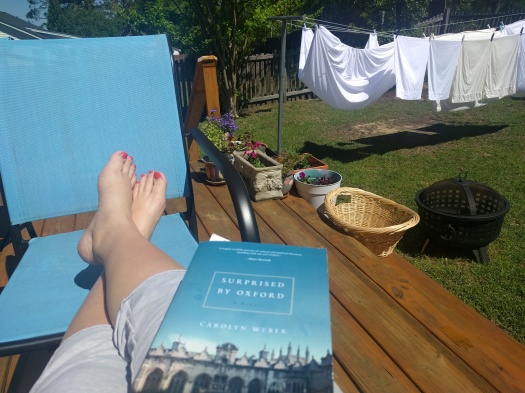 A Sunday morning in May.

A Kiwi in peach country

My friend, Judy, is making her first trip to the South tomorrow. She lives in California

but was born and raised in New Zealand. Even after living in the U.S. for over 30 years she retains her prim and proper British airs, but not without a sense of humour about it.

Judy’s clueless about Southern culture. She actually asked me if it’s acceptable to wear shorts. I reminded her that Jessica Simpson wore daisy dukes. The only thing I’ve found to be unacceptable down here is putting sugar or anything sweet on your grits. That’s lynch-worthy behavior.

This visit’s gonna be good for a few laughs.

What only a transplanted Yankee knows

So several of my friends from up North rented a house on James Island, South Carolina this week. Of course, I was invited to join them, which I did.

The first day I guided them through downtown Charleston where we visited the farmer’s market (where we purchased, among other

things, pecans (please say peh-cahn), peanuts, strawberries, corn, squash and Italian Ice). We got goosebumps when we stopped in front of the now-famous Mother Emanuel AME Church, then strolled down East Bay Street, had lunch at Magnolias (fried green tomatoes and shrimp and grits, mmm…mmm!), and wandered through the Charleston City Market. It was an exhausting day.

Today, some of them headed to Ft. Sumter to soak in a little history, while others went on the Old Village Home, Garden & Art Tour. Tomorrow evening a ghost tour of Old Charleston is on the agenda.

And what I am doing? Sitting back at the house with my feet up looking at this because this is what I come to see and do in Charleston.

I don’t typically define myself as a South Carolinian, not having been born or raised here. But this past year, I found it difficult not to.

Every South Carolinian will admit that 2015 was a horrible year. We were in the international spotlight way too many times last year for all the wrong reasons. 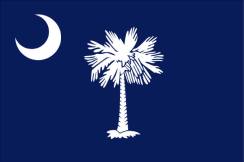 Church in Charleston. Our grief was nearly as deep as that of the victims’ family members and were deeply ashamed that one of our own could cause us such heartache. In July, we cringed as racial tension erupted again when what amounted to an in-state war over an outdated flag was fought in front of the media’s cameras. In the end, South Carolina entered 21st century when the Confederate flag FINALLY came down from the S.C. State House grounds, where it never should have been flying. And then we had to suffer through endless video broadcasts of two tragic and allegedly racially-related shootings of possibly innocent people by law enforcement..

Probably the only person to come out a winner in all this is our governor, Nikki Haley. And kudos to her. Time Magazine listed her as one the “100 Most Influential People” for her leadership during these days (among other reasons, I’m sure). If you don’t have a copy you can read Sen. Lindsey Graham’s tribute to her here.

Gov. Haley had a rough first term – so rough that one wonders how she got re-elected. She battled allegations of extra marital affairs, was accused of numerous ethical violations, clashed with her Republican colleagues, and showed poor judgment on numerous occasions – all while trying to improve the state’s 10.8% unemployment rate during the devastating economic crisis that began in 2008.

Most of the contention has quieted down and the rumors of personal and ethical indiscretions have all but evaporated. She’s matured, learned a few lessons, and done a lot right during her second term (including putting Donald Trump in his place with some well-timed Southern charm).

But most importantly, she won our hearts during th

e distressing events of 2015 when she responded to each one with compassion, intelligence and determination. We were proud to have her represent South Carolina’s sorrow and humiliation with such dignity.

I’ve never been a huge Haley fan and often criticize her policies. Nevertheless, I appreciate her leading us with such grace and empathy during our worst days. We needed that. 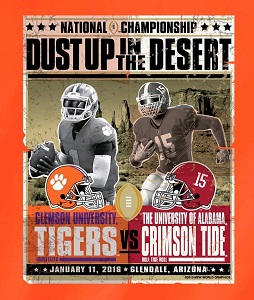 Today everyone in South Carolina is a Clemson TIger. Yes, even the Gamecocks are pulling for Clemson because South Carolinians pull together as one when it counts. This year we saw each other through the Emanuel AME Church shooting, two brutal police shootings of defenseless citizens, a catastrophic flood, embarrassing behavior by presidential candidate Donald Trump and his followers, and Christmas week average temperatures of 80°.